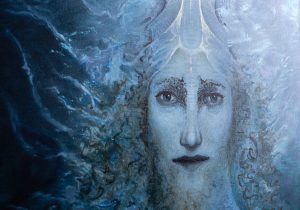 A collaboration between Ashley Christudason and Rob van der Lei, (two brothers from different mothers) has resulted in the creation of ‘Reflecticon (They Come In Dreams)’. The artwork interacts with and reflects both light and shadow because of the techniques involved in it’s creation. See the video for a better understanding.

Ashley Christudason:
I have long been fascinated by Sumerian mythology and it’s resonant ties to the old testament scripture. Reading translations of ancient Sumerian history changed me forever. A race of advanced beings who from heaven to Earth came, who had a tremendous role to play in the creation of mankind as well as the shaping of government, law and order, agriculture and civilisation as we know it. It was the first inspiring force behind the digital creation of the artwork.

Rob van der Lei:
‘Brothers from different mothers’ may not sound very serious, but it most certainly is – Two artists from different parts of the world with a deep respect for each other and their work. The original design which has been a continuous labour of love for over 12 years, was made digitally by Ashley and it depicts the 3 most prolific gods from the book, The 12th Planet, written by Zecharia Sitchin. I knew I didn’t want to do anything to diminish this already great artwork, so I made it a point to keep Ashley posted as much as I could during my creative process. After much discussion and planning, I would first begin my process by adding some extra details to the digital file Ashley sent. Some aspects of the original design would be printed transparent and other parts would be opaque. This was a key move in what would become ‘Reflecticon: They Come In Dreams’. It helped significantly in attaining a shimmering effect. I then did some additional intuitive painting over the work. As I painted the eyes of Enki (the one god in the Sumerian Pantheon credited with the creation of mankind), (See image Detail 1), his face kept turning a little melancholic as more intuitive strokes were added. Strangely, I noticed that when you approach the artwork from a distance, Enki’s facial expression turns from sadness to that of compassion. From my experience of painting memorial paintings, I knew it meant something deeper. I contacted Ashley and it turned out that Enki…… was the one who was the most concerned with the fate of us humans…

They come in dreams, pervaders of astral dimensions, to cast nets of calm over our self created burdens and replace melancholy with a touch of heaven. For heaven too is but a conscious construct. As they nurture, they too come to strengthen; Sometimes our hearts, but more often our senses. To balance the wavering flame of our shifting souls – through trials, tests, and symphonious serendipities.

Advanced and ancestral beginnings of our DNA, they come from Orion, Sirius and the Pleiades. The Father, the Son, and the Holy Spirit, disguised metaphorically as Zeus, Poseidon and Hades. Originators of the Christian Trinity, analogous to Brahma, Shiva and Vishnu of the Hindu Trimurti. A Supreme Triad of Deities, revered and feared from the most remote villages to the mightiest of cities. Those who say their existence is naught, hilariously negate themselves. A species with amnesia, we mulishly question the ancient poetry, yet are blind to the divine symbolism shining through the very clothes we wear, the cars we drive and the songs sung inside our heads.

For each and every timeless myth is based on this Great Pantheon of Gods and Goddesses, of heroes, satyrs, nymphs and muses. The first songs ever sung are no less significant than the first thoughts ever had by our primitive ancestors. The sudden yet inspired idea that mere words could become melodies – where does it come from? The primal audacity to draw pictures on rocks – does it count as less consequential compared to the skilful strokes made by Masters on canvases? From whence does inspiration come from? Where does our will to create but originate?

Awakening a species from a deep slumber, enlightenment strikes like remembrances of forgotten past lives. Enlil, Anu and Enki; the three in one and one in three, united they form a metaphorical sacred tree which holds the roots of our past together. Entangled in a cosmic waltz of fate & destiny, our journey together is far from done.

They come in Dreams, to all mankind,
They come in Visions, to serve as guides.
They are “Those who from heaven came”.

The original artwork will be gifted to the collector of our NFT.